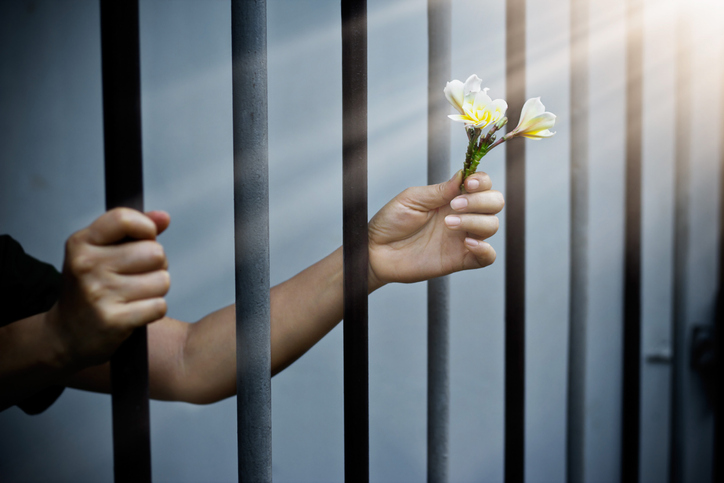 This article was originally featured on AllMomDoes.Com.

It’s so interesting walking into a women’s state penitentiary. Recently, I was asked to serve on the prayer team for a special event. The cold environment and steel doors certainly were not welcoming. However, the volunteers prepared dinner, knowing a croissant sandwich, pasta salad and freshly baked cookies posed as an irresistible offer for most of the girls. As women of all ages began to filter in, it was quite obvious from the folded arms across their chest that they had no interest in being there otherwise. Praise music by Nichole Nordeman seem to lift the spirits of a few, but when the female pastor from Australia starting talking about identity and destiny, the atmosphere really began to change.

Identity. Purpose. Destiny. I’m sure every woman there felt their identity was a number imprinted upon their blue shirt. I looked into their eyes searching for a hint of hope. Little was seen. I had to imagine their lives seem purposeless when the doors to their cells close each night. I heard one say, “Destiny. What destiny?”

Even though I didn’t sit in a jail cell, I remembered the time in my life when I felt the same. To the outside world I was successful and happy. Yet on the inside I was a festering sore looking for something or someone to fill deep voids within my heart—that is, until I met Jesus.

Silently I sat in my seat and began to pray that many in the room would do the same. I was snapped back into the present when I heard the pastor ask, “Who do you say that I am?”

Of course, that was the defining question that Jesus asked Peter, and it’s a question that I believe we all have to answer. When Peter declared to Jesus in Luke 16:16, “You are the Christ, the Son of the living God,” it was in that moment that Jesus looked at him and said, “…I say unto you that you are Peter, and upon this rock I will build My church.”

Peter then had purpose. As the pastor started to speak to this crowd of women, tears started to flow. She said, “You are fearfully and wonderfully made and you know what? God loves you regardless of what you have done.”

I watched over one hundred women line up at the alter that night. As they came, the Lord whispered to me, urging me to speak to them about their new identity. After the pastor prayed the sinners prayer with them, I had the opportunity to speak to three women about who they had become— children of God. I said, “I know it seems too simple to be true, but you are a new creation and all your past is forgotten.” Their eyes looked into mine with bewilderment.

For God did not send the Son into the world to judge the world, but that the world might be saved through Him. John 3:17

As His children, we are saved from the harsh judgments of this world, both those we heap upon ourselves and those forced upon us by others. We are who He believes us to be, and that is surely enough for me.