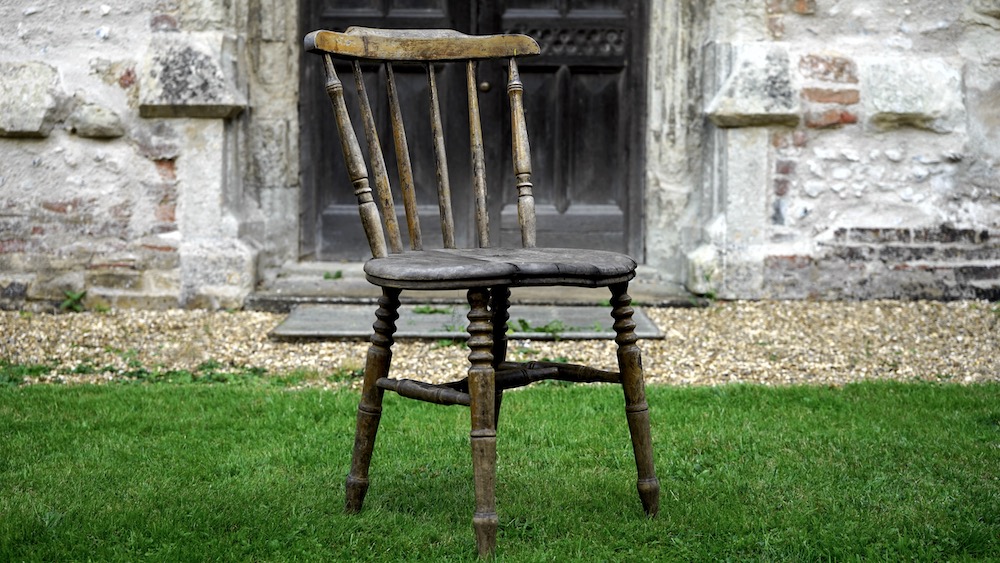 I will never forget the day I saw the man who sat on his front porch in a tattered lawn chair. His stained white t-shirt and faded levi’s hung loose on his body. I couldn’t help but notice that his gray hair was slicked over to one side and that he badly needed a shave. He was the only one outside that day, alone in the little row of houses known as the projects.

As I slowly drove by, I found myself drawn to him. Actually, my heart pounded in my chest. I wanted to stop and introduce myself, but my thoughts prevented me from doing so.

He will think I’m crazy…

I drove on by, and yet, I could not get him off my mind. After church the following day, I asked Troy if he would go with me; he not only agreed, but thought it would be a great idea to take the children. On our way, we stopped and picked up a new pack of Hanes white t-shirts, and off we went for a visit.

Happy to see that he was again perched on his porch, we approached the weathered man. He welcomed the unexpected company and told us his name was Mr. Fly. Further conversation revealed that he had served in the armed forces and had but one living relative; a son who rarely visited. A disposable type phone was Mr. Fly’s only means of contacting him.

“This old phone ran out of minutes weeks ago. I haven’t been able to reach him and I desperately want to see him,” he said.

We promised to add minutes to his phone and to return the following day. That night I found myself praying for Mr. Fly, hoping to understand the Lord’s purpose behind these visits. There was just one problem: I was scared to death! I was still much too young in my faith to openly speak of the Lord with any one, much less a man I hardly knew. Doubts flooded my mind.

I don’t know what to say to him about Jesus…

Why would this man want to listen to me…?

I returned the next day with his phone and the promised mintues, and was rewarded by the joy that spread across his face. From this, I couldn’t help but notice a small shift had occurred in our relationship, almost as though a degree of trust had been established. So, as I prepared to leave, I felt comfortable enough to kneel down in front of him and ask, “Mr. Fly, do you know my friend Jesus?”

Bowing his head, he replied, “I’ve been a very bad boy.”

“Mr. Fly, I’ve done a lot of terrible things too, but it doesn’t matter. God forgives us.”

Silence. Not only from him, but from me as well. I did not know what else to do or say at that point, and so I left.

Days passed. For the life of me, I could not stop thinking about this man. I decided to visit again. With soup in hand, I drove to the small brick apartment. Though a sunny day, Mr. Fly wasn’t on the porch. I walked up to the door and knocked. After no response, I peeped in through the window. Panic ran through my bones as I saw Mr. Fly lying across the bed with his legs hanging off the side. I urgently began to bang on the door.

I knocked for more than five minutes, and just when I was about to call for help, he stumbled off the bed and headed to the door. His mannerisms seemed to indicate that he was drunk.

“What do you want?” he yelled.

With tears in my eyes and a broken heart, I left once again. Troy told me that I should not go back unless he was with me. I knew he was right, but two days later, I thought it wouldn’t hurt just to drive by and see if he was sitting on the porch.

As I drew near, I slowed to a stop in the middle of the road. My eyes could not believe what I saw. A wreath was hanging on the door and his favorite lawn-chair had been removed.

Over the years, I have continued to think of Mr. Fly. I see in hindsight with certainity that  the Lord sent me there that day, but I am less certain as to His purpose. Was I sent in order to provide this man with minutes on a phone, that he might reconnect with his son, or was I to be an image of God’s love? Even though Mr. Fly saw himself as a “bad boy,” God clearly wanted him to feel loved and acknowledged. And yet, I really questioned, “Why me?” God could have sent someone far more equipped, so why didn’t He? Such questions are useless, however, for not only do we lack the proper understanding, but God does not make mistakes.

“I do not consider my life of any account as dear to myself, so that I may finish my course and the ministry which I received from the Lord Jesus, to testify solemnly of the gospel of the grace of God.” Acts 20:24

After that day, I became determined to ensure that I was equipped to give an account of the hope that lives within me to anyone that needed to hear it. I have also learned to trust that the Holy Spirit is ceaselessly working behind the scenes. Even now I pray that Mr. Fly cried out to the Lord in his last hours, because,

“Whoever will call on the name of the Lord will be saved.” Romans 10:13

Now here is the question for you. Are you prepared to tell another where your hope comes from? Or will you allow the hope that you bring to be silenced by doubt?