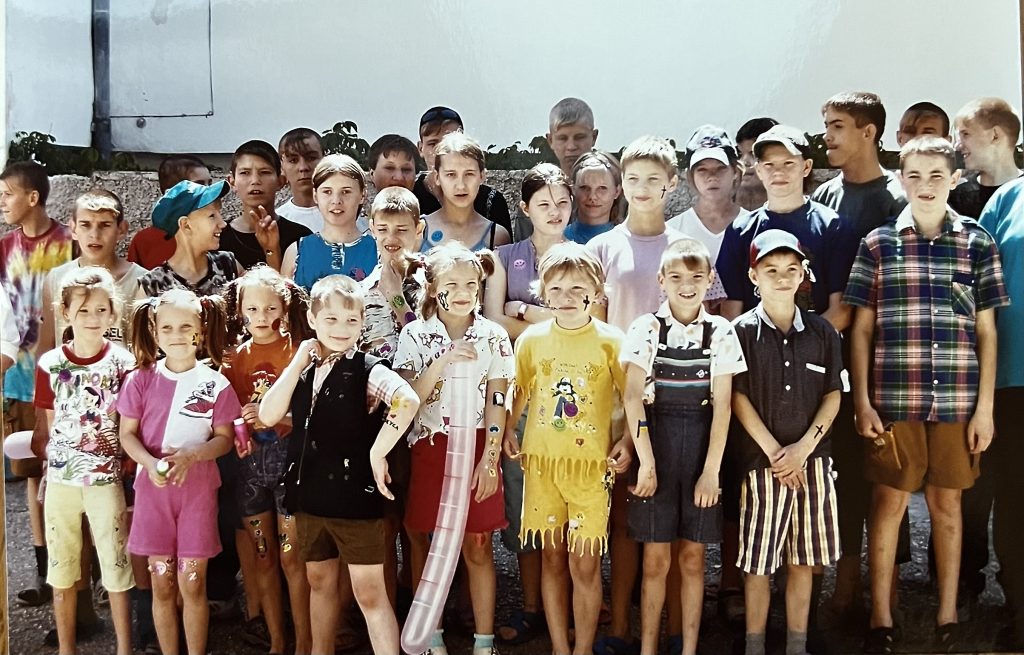 In the summer of 2005, as the Lord would have it, I was on a Ukrainian boat with my man, our two oldest children and forty other team members, traveling down the Dnieper River in Ukraine. Our route of passage offered us the opportunity to visit remote orphanages that rarely received much needed attention from missionaries. After spending so much time in this beautiful country the previous year during the adoption, we desperately wanted our two older children to visit the place their siblings were born.

The quaint cabins on the boat were clean and comfortable with crisp bedding. I found myself thankful that the twin beds were so close together so I could reach across and hold my man’s hand when needed. The open window caused the leopard print curtains to blow gently above our heads and allowed the sounds of splashing water to lure us into sleep each night as the boat journeyed to the next port and the freedom to visit another orphanage.

When Ukraine gained their independence in 1991 from the USSR, parents took their children to government ran orphanages so they would be assured of a meal. There we were thirteen years later; the small villages still showed the remnants of communism, jobs were scarce, and the vodka was plentiful.

However, the people of Ukraine took great pride in their meager belongings. I watched older women sweep the street with handmade brooms crafted from sticks. Every inch of yard space was overflowing with gardens to provide food. Most arose early, often dressing in the same clothes day after day, to work for an hourly wage. The memories of Stalin and the harsh hand of the USSR lingered on their minds. The older folks shared stories of how they had “controlled” the people. Water and electricity could be shut off at any given time. Provision was given only for the necessities of life. Individuals owned nothing. It became easy to see why freedom was so important and not to be taken for granted.

The needs within the orphanages were great. We were there for one purpose—to love the children. My heart wasn’t prepared for the daily greeting of hundreds who came running to receive a hug and the simple pleasure of a sticker placed on their arm. Face painting became beautiful art and the chicken dance brought much needed laughter. Stories of Jesus were communicated with translators. A smile seemed worthy of a thousand words.

Of course, many pictures were taken and journals filled daily about our encounters; however, there wasn’t a way to capture the smells that continue to crowd my mind today. Baths were rarely taken. Bathrooms were often a hole in the ground; toilet paper wasn’t considered a necessity. Fresh cooked cabbage and potatoes made up the daily meal. The orphanage directors said that they did the best they could with what they had been given.

The non-profit we traveled with chose to visit institutions with older children; at the age of seventeen, they were released. With great urgency, we came to share the message of the gospel before they were out on their own. Traffickers awaited at the gates luring the girls with lies of a good job.  Daunting statistics revealed one in ten committed suicide.

Three hours was usually the allotted amount of time at two orphanages per day. At night the team reconvened to discuss the events of the day. Generally, one question was always asked. “Do you really feel we can make a difference in such a short amount of time?”

We were seed planters. We told young and old about Jesus through song and skits. Each child received a bible with a picture of the team, so they could remember us and reflect on the message given. We don’t know who the Apollo’s were that watered the seed after us, but ultimately it was in God’s hands. We had to TRUST Him.  After all, He sent His son Jesus so that not one would perish.

After that first mission trip, I was asked to recruit and organize those trips for eight years. Each time we returned, it seemed our heart grew more deeply in love with the many Yuri’s, Sergio’s and Vika’s. We often saw the same children year after year.

That brings me to today. I will be honest, I have cried off and on since Putin launched his evil upon these sweet people. Thirty years after gaining their independence, they are having to fight to keep it. We all have watched as thousands run with their children to escape, fathers having to say their goodbyes to loved ones as they stay to fight. I have cheered and prayed for Valensky as he refused to leave.

My mind has played over and over the many encounters I had with each person during the years we were there. Do you want to know my greatest burden?

“Lord, did I plant enough seeds?”

I know I have to trust Him, but I also know we are all called to share the gospel to the ends of the earth.

I wish I could go back with a greater urgency and cry out, Do not fear, the Lord God is with you! Most of all, I want to say,

Lord, I simply pray that what is intended for evil, You will use for good. Let Your Light shine in the darkness because we know the darkness cannot comprehend it. May the name of Jesus be shouted from the mountains and valleys, in the streets, at the borders and in the bunkers, over all the earth may they call out to the name of Jesus. We thank you Father and trust in your perfect plan. Amen

Over all the earth…

Though I’m physically not in the Ukraine today, my heart is. However, my commission and yours is the same. We are to share the good news. Is there someone that you need to ask…

“Do you know Jesus?”