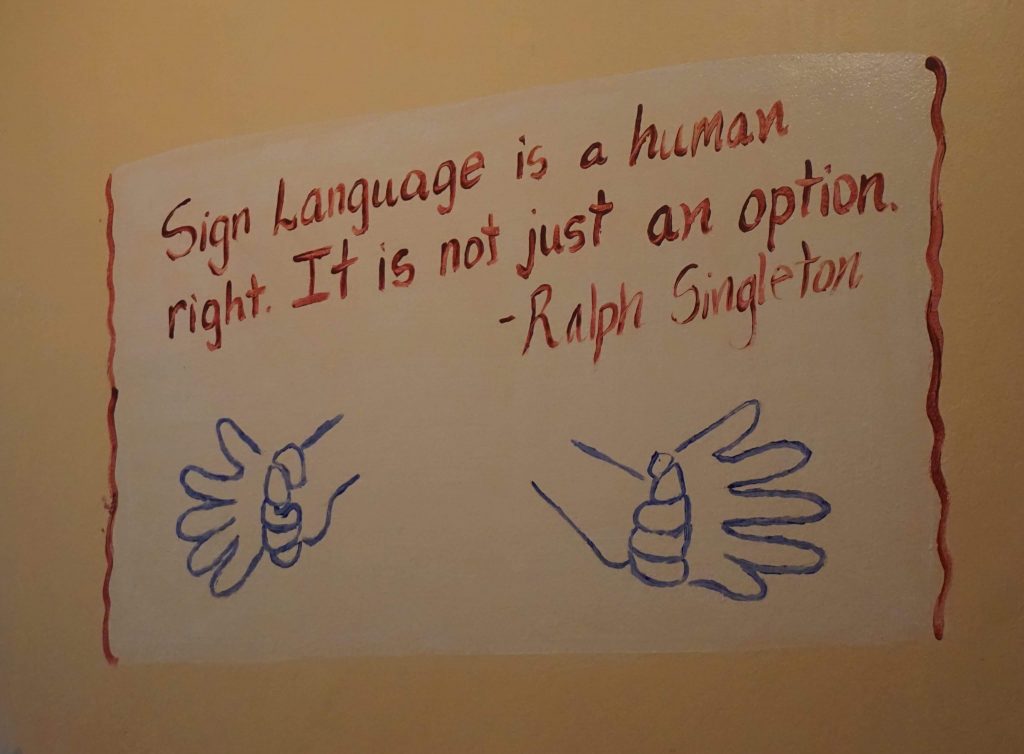 In January I wrote a blog post called “A Voice to the Voiceless” regarding our daughter Rachel and her fight to go to college in spite of her learning differences. This post might make more sense if you revisit the first one on January 23, 2018.

When I left off, Rachel had been accepted to Lee University and had been introduced to sign language as a substitute for a foreign language. She and I were both excited because she is such a visual learner. Never in a million years could I have imagined what God had up his sleeve.

Shortly after the January blog post was published, I received a private message from one of my sorority sisters that I had not seen in many years.

“Rhonda, I work at Brentwood Baptist Church, and we have a very active deaf congregation and one of the few facilities in the world built specifically for deaf people to worship. I’m not sure if Rachel has any interest in working with deaf children, but we have a summer camp called Camp Summer Sign that hires interns. If you think she might be interested, let me know.”

God, what are you up to? She has had only two semesters of signing. Is she qualified?

She was beyond excited to think about the possibility. Then, she casually mentioned that Lee offered a Cross Cultural Perspective Trip to Jamaica to sign with a deaf ministry there the first two weeks of May and through which she could earn an additional seven hours of credit.

She would be more prepared for the internship if she happened to get hired. Lord, if this aligns with your will, make it happen.

“This is the confidence which we have before Him, that, if we ask anything according to His will, He hears us.” 1John 5:14

Rachel not only went to Jamaica, but she was also hired at Brentwood Baptist. Yesterday she came home after completing her second week working at the camp. She was talking so fast I couldn’t keep up with what she was saying; plus, I was distracted watching her fingers form unknown words. She became quite frustrated with me that I wasn’t imitating her actions.

“Rachel, I’m excited that you love it so much, but I can’t learn to sign.”

“WELL Mom, when I adopt a deaf child, you will learn then!”

”Delight yourself in the Lord; He will give you the desires of your heart.” Psalms 37:4

There was a time when my man was just a teenager that he said he wanted to adopt from Russia. Thirty years later, that dream became reality. I believe that Rachel’s wishes may come true as well. Her passion runs deep within her soul.

Have you been at a place in your life that you could not possibly see a positive outcome? That was me. For years, I prayed continually to the Lord for Rachel, but to be honest, I wasn’t sure how to pray. Finally, I completely surrendered to His will for her life. I could not begin to fathom these plans.

I really felt the need to finish this story, because it illustrates so well how our loving God works on our behalf. Now, I find myself dreaming big for her. Will she travel the world giving a voice to voiceless? I believe it is possible. Plus, she might bring me a grand baby to love.